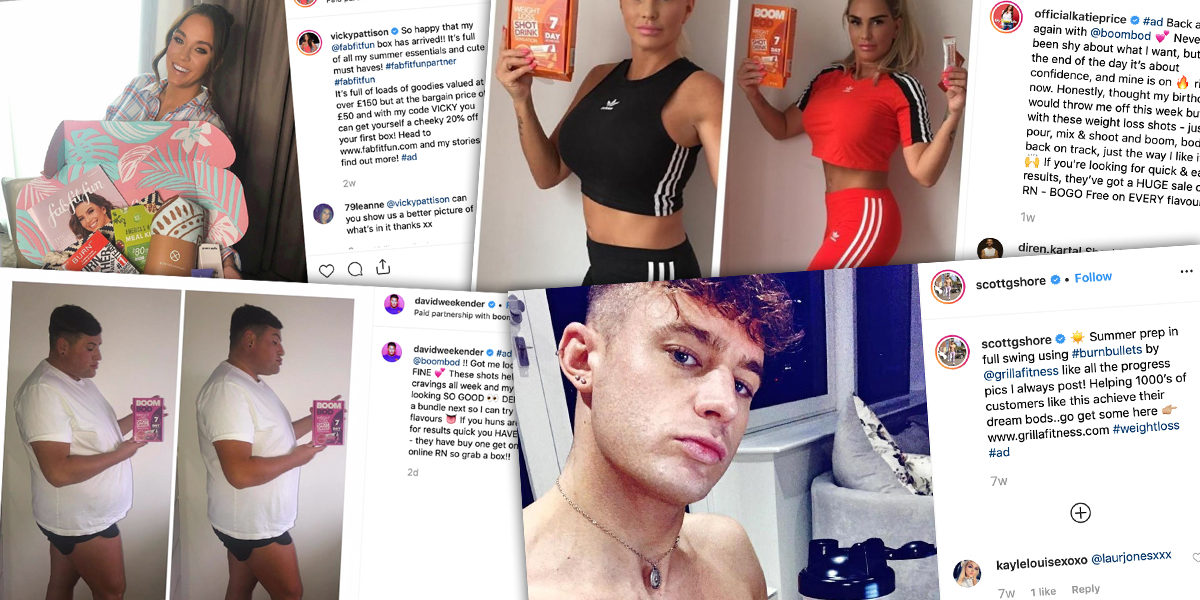 An ‘Influencer Matrix’​… but Morpheus is out of blue pills

Now all the blokes reading this are suitably reassured, let’s talk influencer marketing.

Because the same rules apply.

I’ve seen a lot of really good content from Social Chain’s Steven Bartlett (now there’s a real influencer) of late on how influencer marketing is “broken”.

And he’s right, of course.

There are some genuinely sinister black hat tactics that go on in the influencer marketing space.

Influencer fraud, where followers are bought and bots are used to boost comments and likes, thus boosting engagement, is rife.

But, for me, fraudulent followings isn’t the biggest issue facing influencer marketing in 2019…

…it’s the rise and rise of the Wannabe

We’re talking about an over-saturated space that has been infiltrated by goons who will stop at nothing to achieve ‘fame’ by follower count.

So, what’s to blame? Reality TV… come on now, stay with me.

It was one of the first reality television shows, alongside Big Brother, and was actually pretty genuine and authentic back in 2001.

But once Pop Idol appeared on our screens a few years later, alongside further series of Channel 4’s Shipwrecked, the birth of X Factor and then Britain’s Got Talent, it seemed like the reality TV bubble would burst as quickly as it was blown.

My point is we were all wrong. And what we’ve ended up with is a bit of a monster thanks to shows like Geordie Shore and Love Island.

Now, like a deranged boffin sitting in his lab with his head in his hands as his creation runs riot, we’re all thinking…

‘Shiiiiit, I think we might have gone a bit far…’

Our digital spaces are places where the Love Island / Geordie Shore generation can go and be just like the fame-hungry faces they worship.

Places where a few scantily-clad gym photos could help bag you a place in TV’s most famous villa or a space in the North East’s most dysfunctional house where you can reallymake your parents proud by puking and shagging for the nation’s delight.

And when you emerge and switch on your iPhone, you find that a career ‘influencing’ beckons as your Instagram follower count has gone through the proverbial roof and brainless brands are banging down your door. Ker-ching!

It’s easy work, too. Simply breathe in for the camera and turn your body slightly, like Ibiza Weekender’s David Potts, and claim the miracle product you’re endorsing has removed your chicken bhuna belly.

“Thanks, David, that was brilliant. Here’s five grand.”

If you’re 18 or 19 years old and glued to the social media channels of these ‘stars’, you’re thinking…

And that’s where we are. Round and round it goes like a theme park ride you’re desperate to get off of but the youngster charged with stopping it is too busy looking at his phone.

We’re in a digital space where ‘influencers’ are grown in some kind of Instagram Matrix, but Morpheus has run out of blue pills.

Where everyone with a six-pack, no shame and a phone wants to be and, eventually, believes they are a social media influencer.

They can also employ all those dubious tactics mentioned above to ensure they look like one, too.

So where does that leave us marketers?

Well, sorting the wheat from the chaff in a digital space over-run with Wannabes is becoming ever more difficult.

But it is possible…

It’s not all about follower count

Firstly, don’t be blinded by the numbers.

Say you’re a marketing manager from a medium-sized hotel in Brighton.

Jenny, a self-proclaimed Manchester influencer with 30,000 Instagram followers might absolutely appear to be your type on paper (see… reality TV again) as a marketer looking to spend on an influencer campaign.

You’ve already ruled out Ellie, the Liverpool travel blogger with extensive knowledge of the ‘staycation’ market because her content is high quality, but she only has 1,000 followers.

“We need a quick win. If we use Jenny for a paid promotion on the hotel, that’s potentially 30,000 people we’re going to reach, right?”

But 20% of Jenny’s large following love her because she posts about vegan salads and exercises to make her bum bigger.

And 20% are blokes who like the pictures of Jenny’s bum getting bigger.

50%, meanwhile, have dubious-looking usernames and no profile images. Are the fraudulent alarm bells ringing? They should be.

So, that leaves you with 10% of 30,000 who might be interested in a long weekend on the south coast.

Ellie’s 1,000-strong tribe, meanwhile, follow her because they love her visual content on places just like Brighton and aspire to visit themselves. They are highly engaged and as genuine as she is.

Like I said at the start of this piece: Big might be more impressive at first glance, but only if it’s as effective, genuine and engaged as the tiddler option.

Focus on your brand’s own influence

One of the biggest problems with influencer marketing, even with influencers who do carry the kind of clout to give you a decent ROI on your spend, is the fact they are essentially ‘selling’ your product.

And people hate being sold to.

Unfortunately, no matter how genuine and believable an influencer may appear towards a product they are promoting, the hashtag #ad or words ‘Paid Partnership’ will be enough to put off plenty of potential buyers.

So, spend some time looking closer to home.

The next example is an oldie but a goodie…

Back in 2005, David Beckham was pictured wearing a Superdry t-shirt.

Five years later Superdry was turning over £139million per year and floated on the Stock Exchange.

Beckham wasn’t paid to wear their clobber. He just liked it.

And why wouldn’t he? The brand was clever enough to capitalise on the rise of vintage before vintage was even a thing.

And most importantly, Superdry had a great back story.

An authentic rags to riches tale, or Cheltenham market stall to world domination if you prefer, to inspire and engage its audience.

Now, not every brand can do a Superdry and see a global mega star endorse their product simply because they like it.

But think of David (Beckham, not Potts) as your average customer rather than old Golden Balls himself.

You can get him to love your brand and product(s) so much that he comes back to buy time and time again.

And he gets his mates to do the same because he talks about you all the time on his social media. We’re all influenced by our friends, right?

Why? Because we trust them.

Concentrate on building a loyal following that love your brand because they trust you and buy into what you stand for and they will tell everyone in their world how great you are.

Focus on your brand’s values and make your audience fall deeper and deeper into your world through authentic and believable brand story-telling and brave content that acts as a megaphone for your voice.

Most importantly of all, tap into the emotions of your customers through the content you put out.

If you can do all that, that’s real ‘influence’ right there.

And you don’t need a Wannabe to do it.