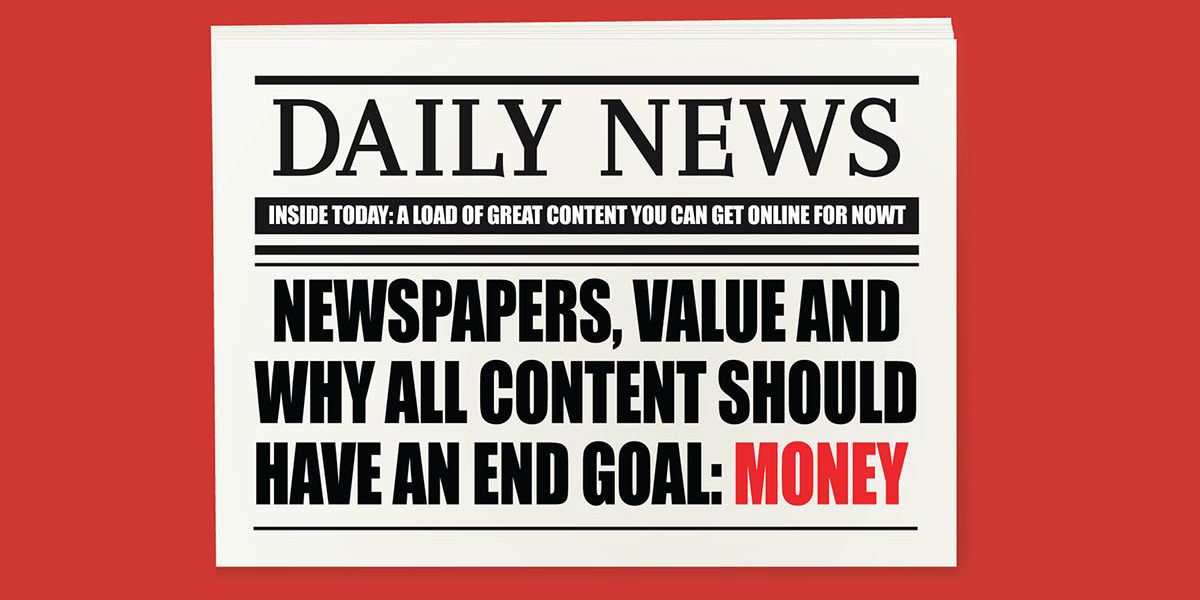 Why content with no value is a waste of time

Actually that’s harsh. They do still exist, albeit largely in a watered down, littered-with-mistakes, filled with piss-poor, regurgitated content kinda way.

That’s what we’re here to talk about and when you think back a few decades, newspapers basically were ‘content’.

Tabloid born of the House Newsprint, First of their Masthead, the Reporter, Breaker of Stories and Mother of Letters Pages.

Most importantly, newspapers were content with clear and defined monetary goals for their publishers:

And that’s what content should be for any business in 2019. A driving force for a clear, profit-driven goal.

We’re all in business to make money, right? There’s no shame in that so just admit it.

But what did newspapers do?

They panicked about the internet…

Back in the early-2000s, when t’internet went boom, newspapers were caught napping.

Their websites were shit, the CMS was worse and they barely put any fresh, bespoke content on their sites.

It was a CTRL C, CTRL V process from the newspaper pages to the web pages (trust me, I watched this happen daily between 2002 and 2006).

But the print titles were still doing great, so nobody cared.

Fast-forward a few more years, when the slow and manageable decline of print suddenly gathered pace, and some high-flying executive piped up:

“Hey, guys, you know the BBC and all our other rivals are really piling into their websites and people are asking about digital advertising… Do you think we should start doing that?”

But there was a slight problem…

Newspapers didn’t have a loyal, engaged digital audience because their websites were shit.

But they did have a loyal, enagaged print readership that was starting to go digital, so they could sell their digital content to them as an add on subscription. Right?

“Whooooaah… hold the hell up, Neil, you crazed buffoon.

“‘Sell’ our digital content? We need to ‘build’ an audience first so we’ll need to give them everything for free.”

Okay, but you kind of do have an audience, because you have a daily print readership of 100,000 people who are using their computers every day to browse the web and read news.

Some of them are starting to get iPhones, too.

Surely you can start to funnel those people towards a paid digital subscription for additional content so at least you’re generating revenue from your online content as well as your print content?

“Look, Neil, just sod off with your hare-brained ideas will you and get back to headlining those nibs about car boot sales and Women’s Institute meetings.

“We’re giving them everything for free and our stories will be ‘web first’ now. People will flock to the website, we’ll get loads of digital ads sold and make a shit-ton of money.”

Of course High-flying Exec was right (to a point).

The audience did flock to the websites in their thousands and now millions. Of course they did – they were getting everything from the 50p newspaper, plus breaking stories, for nothing.

But the online ads didn’t follow and those that did messed up (and continue to mess up even in 2019) the user experience so much that even the audience growth stalled for a while.

Then ad-blockers came along.

Then local businesses starting going direct to their customers through social media PPC and Google AdWords.

Then those businesses starting building their audiences on their own channels through their own content.

You get the picture.

Newspapers stopped placing a value on the content that was still giving their audience so much. They gave it away for nothing.

And with that they also lost sight of that all important monetary end goal.

Apart from that hastily-compiled 200-word website blog on how great your company’s new life insurance policy for the under-30s is.

What action you want your audience to take in the end

The answer to this question should be ‘buy a life insurance policy’. If it isn’t, then stop reading here and go back to writing another inane, meaningless, short-form blog post.

Who are they? What jobs do they do? Are they owning or renting? Do they have children? How do they engage on social media and on what devices?

You HAVE to know your audience, their likes, their dislikes and their habits.

Where they hang out

Probably not Twitter as it’s full of Millennials who couldn’t give a toss about life insurance when they can’t even afford to buy a house.

Only talk to your audience on the channels they frequent. You might think there’s a shitload of people on Twitter and there is.

But if they don’t match your avatar, you’re wasting your time.

If you know clearly who your audience is, you should be able to find them online.

What are their pains? What do they need help with?

Don’t just come up with blog topics because some hipster at a London SEO agency has given you a list of achievable keywords to target.

Answer your audience’s questions and solve their problems, don’t sit there spending hours trying to crowbar longtail keywords into your copy.

Be a voice your audience simply can’t do without. Be controversial. Be brave. Be you.

And by ‘you’, I mean you. And the people in your business.

If newspapers had sold their digital content on the back of the people producing it rather than the newspaper itself, they would have had a product of even more value than the one they gave away for nothing online.

Stories start with people, trust starts with people and authenticity comes from people.

Give your audience value from your people and, most importantly, from you.

Start producing content with that end goal in mind.

An end goal that should always, every single time, without fail, be profit-driven.

Having that one end goal firmly in mind will help you place a value on your content and make it better.

And content of value, unless you’re a newspaper of course, will help you achieve that end goal time and time again.

Why bombarding your audience with content after Covid-19 will see them drop you like a stone
March 22, 2021